Choice Blindness – What are we forgetting? 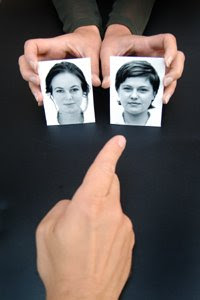 MIT is currently in its Independent Activities Period (IAP). Each January students take a break from regular class work and experience a variety of mini courses ranging from weighty subjects like “Energy Storage Solutions” to just for fun topics like “Build Your Own Electric Guitar.” IAP is a great way to brush up on skills or try something completely new. Fortunately for me the non-credit courses are open to alumni so I’ve spent my week immersed in “Statistics and Visualization for Data Analysis and Inference” (very useful but not much fun) and “Philosophy of Cognitive Science – Choose your own adventure!” (esoteric but mind-bendingly interesting).

Yesterday in the cognitive philosophy course we covered research by Petter Johansson and his colleagues from Lund University. In a 2005 Science paper entitled “Failure to Detect Mismatches between Intention and Outcome in a Simple Decision Task,” the authors present a series of experiments which lead to a construct Johansson calls Choice Blindness. As stated in the paper’s introduction:

“A fundamental assumption of theories of decision-making is that we detect mismatches between intention and outcome, adjust our behavior in the face of error, and adapt to changing circumstances. Is this always the case? We investigated the relation between intention, choice, and introspection. Participants made choices between presented face pairs on the basis of attractiveness, while we covertly manipulated the relationship between choice and outcome that they experienced. Participants failed to notice conspicuous mismatches between their intended choice and the outcome they were presented with, while nevertheless offering introspectively derived reasons for why they chose the way they did. We call this effect choice blindness.”

It is worth taking a more detailed look at the experiment to grasp the full magnitude of this surprising result. Subjects (male and female) were presented with pictures of two different female faces at a time on two separate cards. They were then were asked to point to the picture they found the most attractive. In the manipulation condition, the experimenter performed a slight of hand card trick and presented back to the subject the card they did not pick and asked them to justify their choice. In most cases these subjects proceeded to justify why they choose this other woman as if it was the card they had intended to choose all along, completely unaware of the fact that they DID NOT choose this picture. Amazing!

Why does this happen? The authors suggest that subjects fail in introspection. Johansson believes that, at the time of outcome, subjects no longer have access to their original intentions. A “fundamental assumption of theories of decision making [that] intentions and outcomes form a tight loop” is somehow broken.

There may be another, somewhat complementary, explanation in “motivated forgetting.” Motivated forgetting suggests that given a strong motive and suitable vehicle for belief, people are capable of forgetting information that does not suit their motive and falsely remembering alternative “facts” that do. Note that motivated forgetting involves the subject authentically forgetting the true facts and not just conveniently pretending to forget them for a social/external benefit. In the case of the card experiment, subject desire for consistency may be a strong enough motive to cause subjects to forget their original intent and remember it as it’s opposite.If motivated forgetting is playing a role one might predict that subjects faced with a different motive would not exhibit choice blindness. The following experimental idea could use some work but what if subjects were evaluating and choosing between two race horses before a race at the betting window. The experimenter would then place a bet on the behalf of a subject based on the subject’s choice. In the manipulation case experimenters would ask for a bet, making sure the subject overheard them, to be placed the opposite horse to the one the subject chose. If motivated forgetting is playing a role, I would predict that when the false choice horse won subjects would not remember that this horse was not their original choice and be able to explain the reasons they “chose” this false horse much like in the Johansson experiment. An important difference would arise when the false choice horse lost and the true choice horse won. In this case subjects may remember having actually chosen the winning horse as their motive is now different. This second result would not be predicted with choice blindness.