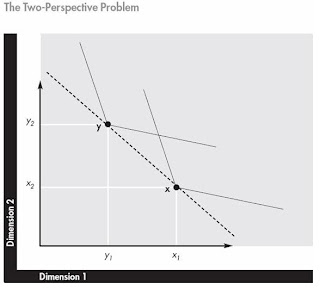 Marketing Professor John Gourville has produced some very interesting work on how framing effects contribute to new product failure. In my opinion Gourville’s primary contribution is to extend the analysis of framing effects to include the influence it has on product teams creating the innovation as well as the more traditionally studied consumer. He speculates that product innovation teams eventually get so engrossed in the new features of their innovative product that they reframe to the innovation as status quo - while their potential customers of course to not share this new frame. Since individuals value gains less than they do comparable losses the new framing leads to substantial misjudgment of customer willingness to adopt the new product. Product innovation teams see “living without” their fancy new features as a loss to great to bear whereas customers view these same features as small gains. The work is published in a few places including as a working paper from the Marketing Science Institute called The Curse of Innovation: Why Innovative New Products Fail.

I believe a different but related analysis can be carried out in the realm of IP licensing. Generally speaking, in the corporate world research investments are made with the intent of creating valuable IP for a company’s own use in products it brings to market. However, at the other end of the research process companies often find they have some subset of IP that is valuable but does not necessarily fit the company’s business plan. In this case the company is faced with a decision: a) license/sell the IP to another company who wants to use it in the market in exchange for a fee and/or royalty stream or b) hold onto the IP “for now” as an option just in case the company later decides it wants to make use of it.

Many argue that far too often the choice is “b” for various reasons including inertia, fear of creating a competitor, inability to find a suitable licensee or to properly value the asset, etc. I believe a substantial contributor to under licensing is the frame in which the eventual performance of a licensed asset is viewed. Many in the licensor company will view licensee performance from a perspective of “it could have been ours.” They take on a frame that had their company made use of this IP they would have 100% of whatever benefit is derived by the licensee. The entire gain of the licensee is framed into a “loss” for the licensor. Even if the licensor received a substantial royalty in the arrangement and thus shared materially in the success, this royalty would be viewed in the realm of gains or netted out entirely as a loss if it is considered at all. This creates a paradox in that the greater the success of the licensing arrangement the more licensors will perceive a costly loss. It is no wonder in the face of this paradox licensor decision makers often wrongly choose to let the asset “rot on the shelf.” They are able to get away with this because most companies do not seem to assign the cost of spoiling IP inventory to the licensor decision makers. That true loss needs to make its way into the mental calculus if we are to make better licensing decisions.
Posted by Justin M. Cook at 3:33 PM No comments: