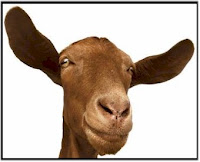 Before moving on to other phenomena, let’s take the topic of moral luck for another spin. To begin with, please observe that there is an inherent assumption in the standard framing of the effect. The assumption is that subjects are judging the moral act itself. As demonstrated in experiments with this framing in mind, subject judges non-normatively rate an act as less moral when there is a negative outcome and more moral when there is a positive outcome -- as compared to control groups that judged the act “without an outcome.” Like an optical illusion, juxtaposing a moral act with different outcomes can make the act itself look different.

As a mental exercise, let us see if we can turn the standard framing on its head. What if the effect is manifest not from subjects judging moral acts in the light of outcomes but instead from subjects compelled to assign blame for bad outcomes? Colloquially, this concept is found in the term “scapegoat” and in the phrase “someone is going to have to take the fall.” In this alternative “outcome as driver view,” the energy/motivation to blame/punish/label amoral is generated by the bad outcome not an aversion to the revisited morality of the precursor act.

Consider bad outcomes in a vacuum. A sweet little old lady with no family or friends loses her poorly diversified retirement savings in the stock market and can no longer support herself. Or alternatively, a flood victim is left trapped on his roof for days and finally, succumbing to the elements and starvation, dies. With these outcomes, one of the very first questions we are compelled to ask ourselves is “who is to blame?” This seems a natural and productive response. We want to know how this unjust situation could possibly have been allowed to happen or even if someone purposefully caused it to happen. The reason we want to know who is to blame is so that we may be better able address a pressing need for support in the case of the old lady (who is responsible for her now?) or respond to similar situations in the future in the case of the flood. This motivation to assign blame exists even though, unlike in the moral luck experiments, there is no preceding moral antagonist identified. If we were to identify a possible antagonist (stockbroker, FEMA official) the motivation to find someone or something responsible would compel subjects to rate an available antagonist negatively to restore a sense of justice.

This scapegoat framing could explain why subjects rate the immorality of actors when there are bad outcomes as more immoral when compared to the control which has “no outcome” but, on the surface, the theory does not explain why situations with positive outcomes are rated as less immoral than the control. Since this is a mental exercise and we are questioning assumptions, let us take things a step further and challenge the idea that the control scenarios truly represents no outcome. Perhaps there is an outcome and a negative one at that – uncertainty.

Most people very much dislike uncertainty. Moral luck experimental control stimuli leave subjects with unresolved scenarios in which subjects can easily envision bad outcomes resulting. This uncertainty and threat of a bad outcome is in itself a negative outcome. An uncertainty outcome is likely less saliently negative than the certain loss of retirement funding or death from starvation in the earlier examples, however, it is still a negative outcome that may generate desire to assign blame.

Finally, if we quickly assume that positive outcomes may generate motivation to assign positive credit or at least (and perhaps more likely) they do not generate motivation to assign blame, then the scapegoat theory would indeed explain the outcomes seen in the various moral luck experiments. The certain negative outcomes scenarios would have its antagonists rated the worst, the uncertainty outcomes rated negatively and next to worse, and the certain positive outcomes would rate best either as a positive act or at least a neutral one.

For this scapegoat theory to have any value there should be additional hypothesis that could be generated which would predict results that differ from what might be predicted using the standard moral luck theory. Here are a few possible ones that pop to mind (some more merited than others):

* When faced with a bad outcome in the absence of a moral antagonist, subjects will be willing and able to self generate a generic antagonist and assign blame. The worse the outcome the worse will be the morality rating.

* When an antagonist is introduced, even one with weak ties of responsibility, subjects will assign near full blame to this antagonist (similar rating to the subject’s invented generic antagonist).

* Subsequently, when a more clearly responsible second antagonist is introduced in the presence of first, subjects will reassign most of the blame to the second antagonist, improving the morality ratings of the first.

* If morality is associated with an actor, each actor should generate their own rating independent of other actors. If blame is a fixed quantity based on the negativity of the outcome, introducing more antagonist actors will diffuse assigned blame across antagonists.

* When faced with a good outcome in the absence of a moral (pro/an)tagonist, subjects will have more difficultly self generating a moral actor and assigning credit in the form of a favorable morality rating.

* When a moral actor is introduced, one with weak ties of responsibility, subjects will assign relatively neutral to positive morality ratings for this actor (similar rating to the subjects invented actor if they were able to generate one).


I believe the desire to assign blame in the case of bad outcomes is powerful, so powerful that people will even sometimes personify the natural world to have “a someone” to blame. However, I am under no real illusions. Remember that this is merely a thought exercise and that the simplest explanation is usually the best. The moral luck framing of this phenomenon has been the stuff of philosophy for a long time and the basis for experiments by some of most admired researchers in the field. I had to go through a lot of logic gymnastics to challenge the moral luck assumptions and in the process generated many new assumptions of my own to lay out the scapegoat theory. There are possibly some big holes in the theory and the predictions are still pretty loose. Additionally, there are very likely results generated by actual moral luck experiments that the scapegoat theory does not explain as I’ve only looked at the most basic findings here. Crafting an alternative explanation is enjoyable and it may be interesting to run a few experiments to test some of the new predictions. However, I predict that we will want to stick with the findings of the papers noted in the previous posting.